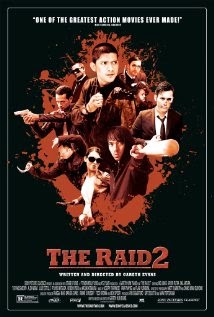 The Raid: Redemption (2011) set an impressive standard for not only Indonesian martial art films, but for action films in general. Director and writer Gareth Evans as well as actor Iko Uwais continues the Jakarta-based story with the second installation of the intended trilogy, The Raid 2: Berandal. Just like its prequel, the film shows an astounding amount of intensity and swift, skilled choreography. But The Raid 2: Berandal has no limits in regards to charismatic cinematography, spectacular production sets, and cunning sound effects making it a captivating, well-thought out action, crime film.

After discovering that corruption is present within the police force of Jakarta, the once rookie Rama (Iko Uwais) is pulled into a mission to go undercover to further expose the issue. Rama engages in a close relationship with the reckless Uco (Arifin Putra), who is the son of the respected and feared mob boss, Bangun (Tio Pakusadewo).

Uco eagerly waits for the day that Bangun will hand over more responsibility and authority of the family “business” to him. Bejo (Alex Abbad), an independent crime mobster, also craves for more power and eventually proposes a deal with the avid Uco. As the 150 minute film progresses, the number of mobsters and those involved increase due to multiple characters’ desire to control the “lands”.

Although Rama’s mission is to expose the corrupted police force, his intentions are to protect his family and to avenge his brother’s death. Rama struggles with focusing on the mission’s objective because he is constantly dealing with the vigilant violence and merciless murders initiated by the mobs. The longer he is undercover, the more involved he is with Jakarta’s mob scene and drifts further away from the chance of returning to his what used to be normal life with his wife and son.

Being an action film, viewers expect fast-paced scenes that gets their heart beating and eyes fixated on the screen. Evans succeeds in this aspect, but goes above and beyond. The numerous fight scenes are defined by its nifty shots, disoriented camera angles, and shaky camerawork to give off a fierce feeling but then shifts to scenes with more stability to create a balance that will not overwhelm viewers with impulsive, endless violence. The quickness of the film is very intricate and brisk and viewers need to give full attention to experience the film thoroughly.

The production sets in The Raid 2: Berandal are also truly splendid and diverse, opposed to The Raid: Redemption, which was restricted to an apartment complex. But since this is the sequel, Evans was able to gain funding to expand the shooting locations. Almost every scene had a long shot or an establishing shot that showcased the beauty and uniqueness of each scene. The first fight scene was set in a mostly gray and neutral colored prison bathroom, whereas the last fight scene was set in a bold red and isolated restaurant. In between those scenes, there were sets such as a muddy prison courtyard, a vibrant nightclub, and a busy highway.

The sound effects employed were highly effective. The shots fired, bones broken, punches thrown, cries heard, and blood squirted would not be as animated if it were not for the sound effects. Sound did not only emphasized the violence, but it dramatized key points such as when a character had a self-realization moment. When a character became aware, the outside sound muted. For example, in the premiere fight scene at the prison bathroom, before the fight commenced, the volume of the film evidently lowered to demonstrate Rama’s concentration.

As mentioned previously, The Raid 2: Berandal has no limits. Evans has no restraint with portraying the countless brutal brawls.The intensity is high, the blood is endless, and the hearts of viewers will race. The Raid 2: Berandal is visually appealing due to its cutting-edged cinematography but is also visually appalling to those with a weak stomach or hematophobia, the fear of blood.
Posted by Malisa Perng at 5:01 PM No comments:

Hopefully, you can catch my drift on how I feel about these films.